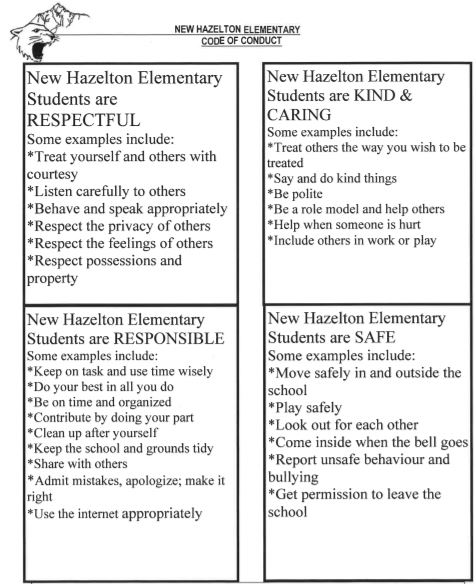 Inappropriate behaviour can consist of, but is not limited to:

Forms of unacceptable conduct mentioned above are only some examples and not an all-inclusive list.

Consequences will be applied in a fair and consistent manner, respecting individual rights, responsibilities, age, and maturity; and be restorative rather than punitive in nature.

Are Free From Acts Of:

Do Not Tolerate the Presence Of:

As circumstances warrant, the Principal has a responsibility to advise other parties following a behaviour incident:

New Hazelton Elementary School’s Code of Conduct has been structured to align with and adhere to the standards outlined in:

B.C. Ministry of Education: Safe, Caring and Orderly Schools A Guide (Nov. 2008) and Developing and Reviewing Codes of Conduct: A Companion (Aug. 2007) both found at http://www.bced.gov.bc.ca/sco/